When reading the Qur’an, we frequently refer to Warsh or Hafs and say, “This is Hafs” or “This is Warsh”. What we mean by that is that this is the riwaya or Warsh or the riwaya of Hafs. It is the riwaya of a particular qira’a. The qira’at or the readings, or methods of recitation, are named after the leader of a school of Qur’an reciters. Each qira’a derives its authority from a prominent leader of recitation in the second or third century hijri who in turn trace their riwaya or transmission back through the Companions of the Prophet. For instance, in the back of a Warsh Qur’an, you are likely to find “the riwaya of Imam Warsh from Nafi’ al-Madini from Abu Ja’far Yazid ibn al-Qa’qa’ from ‘Abdullah ibn ‘Abbas from Ubayy ibn Ka’b from the Messenger of Allah, may Allah bless him and grant him peace, from Jibril, peace be upon him, from the Creator.” Or in Hafs you will see “the riwaya of Hafs ibn Sulayman ibn al-Mughira al-Asadi al-Kufi of the qira’a of ‘Asim ibn Abi’n-Nujud al-Kufi from Abu ‘Abdu’r-Rahman ‘Abdullah ibn Habib as-Sulami from ‘Uthman ibn ‘Affan and ‘Ali ibn Abi Talib and Zayd ibn Thabit and Ubayy ibn Ka’b from the Prophet, may Allah bless him and grant him peace.” These all go back to the Prophet.

In this context, we should mentioned that the Prophet himself said that the Qur’an was revealed in seven dialects (ahruf, sing harf). Harf here means dialect, idiom, or mode of expression. Now, during the khalifate of ‘Uthman, this had given rise to squabbling. For instance, the Syrians followed Ubayy ibn Ka’b, the Kufans followed ‘Abdullah ibn Mas’ud, the people of Hims followed al-Miqdad, and the people of Basra followed Abu Musa. To put an end to these squabbles over which was best, ‘Uthman decided to unite the community behind one text.

In the time of Abu Bakr as-Siddiq, Zayd ibn Thabit had been charged by Abu Bakr to gather together all the written parts of the Qur’an and compile a complete text (for a large number of huffaz had been killed in the Battle of Yamama). He did this, and it is reported that he was the first to collect the Qur’an between two covers.” This copy went from Abu Bakr to ‘Umar and then to Hafsa.

‘Uthman used it to make his copy which was then distributed to all parts of the Muslim umma, but it is reported that ‘Uthman “made the copies of the Qur’an” or “united the Muslims on a single copy.” The impetus to do this was provided by Hudhayfa ibn al-Yaman when he returned to Madina after observing regional differences. He said to him, “Take this umma in hand before they differ about the Book like the Christians and Jews.” So he sent for the copy made by Abu Bakr which was in the possession of ‘Umar’s daughter, Hafsa.

The Qurayshi dialect was favoured in this and this eliminated much of the diversity, but some of it was still reflected in the different readings because it was essentially a business of oral transmission and there were no diacriticalmarks in the ‘Uthmanic script. People recited the Qur’an as they had read it from their teacher and they in turn passed on this oral transmission.

Within the qira’at, there are two categories:

Mutawatir: a transmission which has independent chains of authorities so wide as to rule out the possibility of any error and on which there is consensus.

Mashhur: these are slightly less wide in their transmission, but still so wide as to make error highly unlikely.

There are 7 mutawatir qira’at and 3 mashhur ones.

There are also some “shadhdh” readings, rare readings which are generally discounted.

It used to be that proper scholars learned all 7 or even 10 qira’at. Sometimes they would use one qira’a one day and another the next day. Some people had copies of the variants marked in them. There was a slavegirl called Tawaddud in the time of Harun ar-Rashid who knew all ten readings by heart,

However, these readings did then to divide up according to location. For instance, in 200 AH, Basra was reciting the qira’a of Abu ‘Amr and Ya’qub, Kufa was using Hamza and ‘Asim, Syria was using Ibn ‘Amir, Makka had Ibn Kathir, and Madina was using Nafi’. Egypt, which was the home of Warsh, used Warsh largely up until the arrival of the Turks. Then Hafs became popular as it was the variant which the Turks used. Hafs, incidentally, is the qira’a of ‘Asim, used in Kufa. The Warsh riwaya of the qira’a of Nafi’.

Now, each of these readings, or riwayas, is the whole of the Qur’an as recited by a master in all the variants which are transmitted from him. It is a corupus of reciation. The forms of each recitation are referred to by the notable students of the master who recited them. So we will find the tariq (pl. turuq) of so-and-so, the student of the master. Then under the Turuq, there are also the wujuh. We find the wajh of so-and-so from the tariq of so-and-so. There are about twenty riwayat and eighty turuq. So you can see how fine and precise the science of transmission was with these people. The difference between the turuq and wujuh under a riwaya are so slight as to be almost unnoticeable. They are mainly in intonation and diction rather than voweling or inflection. But this is the level of care and precision which these people had. 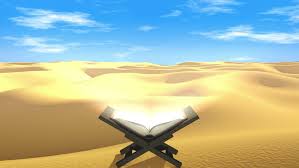